Confounded On The Bridge Between Worlds, By Carolyn Baker 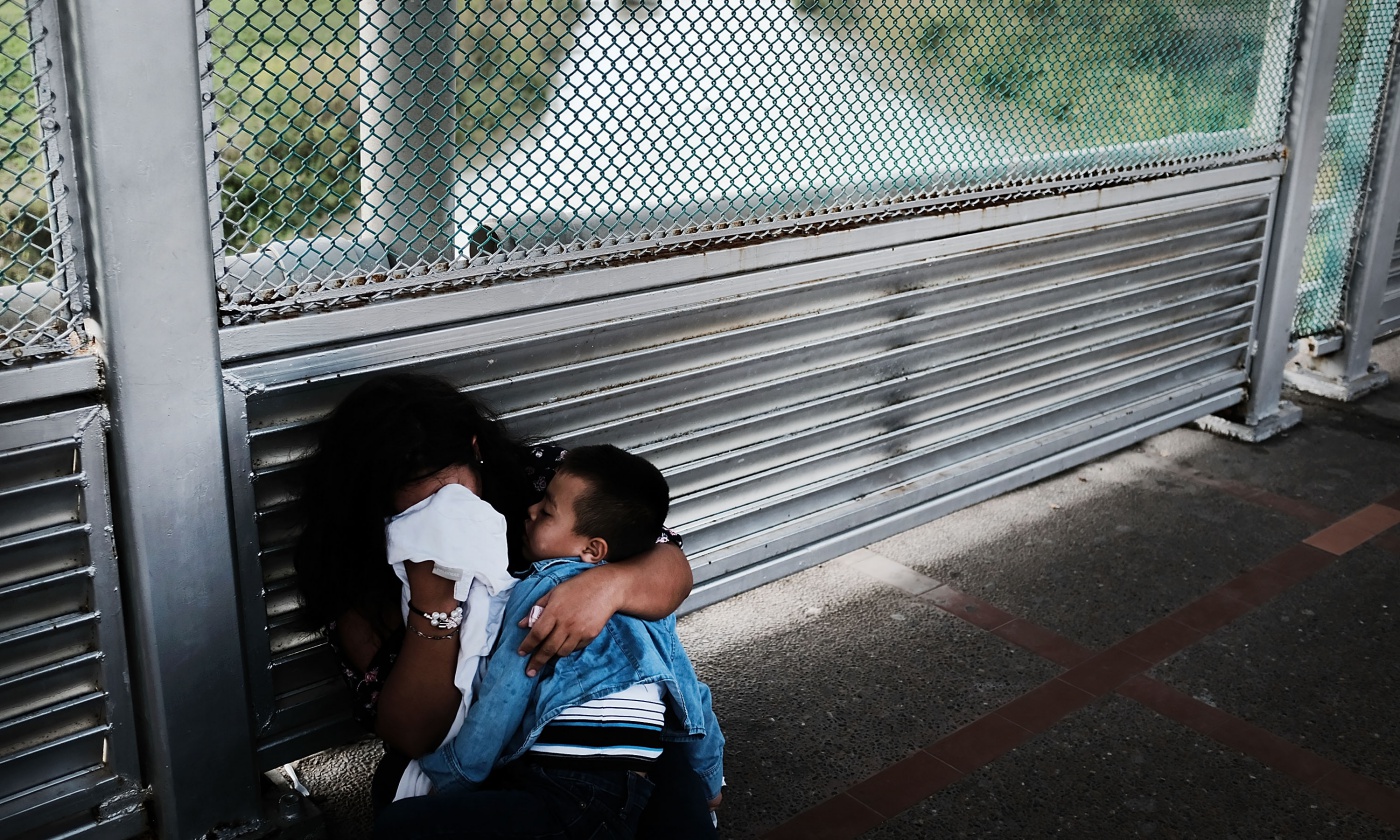 Like so many individuals, I was compelled last week to bear witness to the contrived crisis created by the Trump Administration at the southern US border. The images, the sounds, the stories continue to swirl in my head even as this week brings a host of new, vivid, and shocking reports.

I lived on the US-Mexican border for 11 years of my life, and one of those years I was a six year-old child. In those days, Mexico was far safer than it is today. Living in Brownsville, Texas, my mother and I sometimes walked across the Gateway Bridge into Matamoros, Mexico to shop or eat ice cream or simply experience a change of scenery and culture. As privileged American citizens, we were able to come and go, facing only the questions, “Are you an American citizen?” and “What are you bringing from Mexico?” when we returned.

Last week my heart was broken when I watched a TV anchor reporting from the center of the Gateway Bridge as dozens of Central American immigrant mothers and their children were caught between ICE agents in the middle of the bridge on the American side and the impossibility of returning to Mexico where they might die or be kidnapped. Quite naturally, memories of effortlessly walking back and forth across the bridge flooded my mind. I have never known the state of legal and political paralysis these women were facing, feeding their children and themselves irregularly and only if strangers brought them food and water.

And then I reflected on how all who are aware of the extent of our global predicament are also caught between worlds with one foot in each. To attempt to ignore the predicament and return to our former state is dangerous, if not lethal. To charge ahead, attempting to save the world and change the system guarantees that we will be apprehended by the system, imprisoned at least emotionally and spiritually, and separated from what matters most to us. So there we are, on a bridge between worlds, feeling paralyzed, helpless, and despairing.

I am not writing these words to reassure you that there is hope and that somehow, our confounded status will improve with time or the next election. The United States government has created a policy of zero tolerance for migrants of color entering the country. Last week, it was separating migrant parents from their children. Then came the Trump cave-in to public pressure and the supposedly “encouraging” news that families going forward could remain together. Now this week, Trump wants to end due process for immigrants altogether. What will it be next week, and the week after that? Massive internment camps are being constructed on several American military bases for immigrant families. Military personnel or private contractors will be in charge of overseeing “inmates.” And given the fact that the camps are on military bases, media will have no access, and they will essentially become black sites. Welcome to Gitmo, USA.

Oh yes, Clinton’s immigration policy was brutal and Obama’s even more so. But quite frankly, I am sick to death of hearing how bad things were under Obama and Clinton and how bad things would have been under Hillary. Don’t even think about going there with me. I do not wish to ignore historical perspective, and indeed, both parties have created the autocratic horror we are sinking more deeply into with every passing day. But all of the historical analysis in the world will not save our asses from the fascist collapse in which we are presently ensnared—even if we do not live in the United States and live in or near a country where the global trend toward white nationalism and autocratic rule have triumphed.

Unless you are white and have a seven-figure income or more, you too are caught on the bridge. You too are feeling paralyzed, traumatized, and thoroughly numb. Like the cornered migrant, told not to cross illegally but rather to present themselves for asylum at a port of entry—where they are then arrested, on some level, we all feel confounded. Wherever you turn, most likely there is a sign reading something like, “Abandon hope, all ye who enter here.” And—things are not yet as bad as they’re going to get.

So little history is taught in this culture, and what is taught is pathetically dumbed down. The few who actually experienced the Nazi holocaust will not be with us much longer, and the millennial who has a clear understanding of what happened in Germany in the 1930s and ‘40s is rare.

In his recent article, “Is America Undergoing A Fascist Collapse?” Umair Haque states:

Here is the textbook definition of a concentration camp: “a guarded compound for the detention or imprisonment of aliens, members of ethnic minorities, political opponents, etc.” But funnily, foolishly, and strangely, American media, never noted for its intelligence or bravery, started referring to these as “tent cities” and “prison camps”. They are no such thing. Here we have one of the bona fide, genuine, historical red alert indicators of a fascist collapse — the rise of concentration camps. Are there others? I know — it’s a scary word. A thing no one wants to be. And yet, hiding from reality is no way to escape it. So let’s consider the (other) key indicators of a democracy collapsing into fascism, one by one — and you be the judge. There is rhetorical dehumanization — the scapegoating of minorities, the vulnerable, immigrants, and anyone different. But not just by anyone — by the heads of political parties, by those in charge of institutions, by the head of state himself.

And even now, while migrant families are not being separated, haunting questions remain: Where are the infants? Why are the children being dispersed around the country and often moved several times? What is behind the chilling secrecy of the entire operation?

No matter how much contempt you may have had for Trump or Hillary two years ago, would you have predicted that in the summer of 2018, we would be witnessing concentration camps in America? Now imagine what life will be like in 2020. Add to the climate hell that Trump is exacerbating all of the fascist horrors that you couldn’t have predicted two years ago and at least a dozen more that you can’t predict now, and then tell me you aren’t jonesing for something to numb the pain.

As Haque emphasizes, cultures become totalitarian because somewhere, somehow, they buy into the lie that some people are better than others. Some people deserve to be treated with kindness, compassion, and respect, and others deserve to be imprisoned, deported, and killed.

More useful than obsessing about the Deep State and Obama and Hillary and all those nasty Democrats or the so-called Progressives who might save you in the next election, educate yourself about what actually happened in Germany in the 1930s. Much of what you are witnessing now is a distant but distinct mirror. When history repeats itself, it always takes different forms but maintains consistent themes.

Whatever you believe about the lawlessness of previous Presidents, the current President of the United States blatantly deems himself above the law. He detests the Constitution, the courts, and anything that may impede his autocratic rule. He may very well destroy every legal probe into his life and finances and come out smelling like a rose. Should that happen, the rule of law in America will be permanently obliterated, and a fascist collapse accelerated.

I have been writing about collapse for more than a decade, and perhaps you have been reading about it for even longer. While I know that it is inevitable and that in tandem with climate catastrophe it will be even more horrific than seasoned students of collapse anticipated, it matters to me how it unfolds. Throughout history, the collapse of societies has played out in a manner unique to each one. How this collapse plays out matters to me. It is poised to be violent, and my intention has always been to minimize the brutality. The first step in that project is to name what is so at this moment in time and to stop minimizing it by pointing to the myriad evils the Unites States has perpetrated on other countries in the past. Indeed, the chickens have come home to roost, and now it is our turn to deal with them.

Resist what is happening with every fiber of your being, and pick a cause—or let a cause pick you, and commit to it.

If you can do nothing more than express kindness to other living beings and yourself, you will have made a difference in that being’s life in that moment, and you will have made a difference in your own. Do everything in your power to subvert the lie that anyone is better than the other. Cultivate spiritual and ecological practices that deepen and expand your felt experience of oneness with all life.

The bridge is where we live in this moment, and the fastest way to end bridge-dwelling is to be fully present to it. Let’s occupy it together, in between worlds.