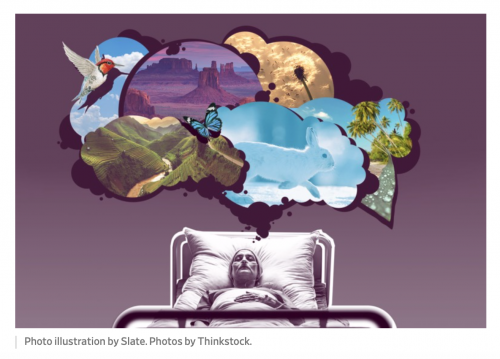 (Read the original in Slate)

This extraordinary article is a superlative example of how our mortality can transform us, humble us, fill us with grace and kindness… even as it is kicking our ass.

I was dying. Not just in the way that we’re all inching inevitably toward our own deaths each moment; I was hurtling toward a specific death with a name, a shape, and a timeline. I was 37 years old and I was dying of leukemia.

I was lying in a hospital bed, so ill that diagnosis, when someone finally named the doom I had been feeling in my body for months, was a relief. At least the sense of vague terror and impending catastrophe I had been feeling had a name. A cure, in the shape of a stem cell transplant, was possible, but it required the complete and utter dissolution of myself, dangling my broken body over the edge of the very cliff a cure is meant to postpone.

It wasn’t just my body that dissolved in those weeks: My mind and soul were also broken apart, fragmented, and brought to the edge of ruin. In medical terms, I became depressed, hallucinatory, and delusional. And in medical terms, the team of doctors really didn’t have jack-shit to prescribe me except for patience.

I was visited by a mindfulness practitioner during this time, but I was too far gone for prolonged mindfulness practice, unable to bring myself to a set of exercises that had sustained me prior to illness. There was simply no self to bring. Instead my visitor asked me to count to four, in line with my breath. And then to do it again. And to come back to this simple counting whenever I needed it. I could get to four, and then four again. I could get through my pain, my nausea, my misery, for the count of four breaths. And then I could ask myself to do it again.

This practice didn’t make me feel better. I was still miserable and broken and absent. But it gave me the space to sit with that misery, call it by its name, and know its shape. That was valuable, just as the name and shape of the leukemia diagnosis had been valuable some months before.

After my stem cell transplant, I was pulled back from that cliff over which I had dangled for many weeks. Many hands took part in pulling me back—doctors and nurses; my husband; my parents; endless numbers of blood donors; and the new cells, a gift from a woman I had yet to come to know, a mother of three across the country, who gave me a new self to inhabit. None of these people knew if their gifts would have any effect at all, nonetheless they gave them freely, hopefully, and with the knowledge that they had nothing else to offer.

Three months later I returned back to my home, my husband and children, my life. One year later I returned to work as a professor of chemistry and environmental studies, teaching the same material I had taught before my illness. Some of it was banal: procedures for balancing chemical reactions, reassuring in their straightforward clarity. But some of it took on a new emotional significance—specifically, teaching about climate change, biodiversity, and extinction.

This planet is dying. Not just in the way that life on Earth is always, inevitably beginning and ending, that species are rising and falling, that extinction and evolution occur, and that temperature and sea levels cycle dramatically and irregularly. In the 21st century, Earth is hurtling toward a specific death with a shape, a name, and a timeline. It is dying of global warming, climate change, extinction, biological annihilation, and ocean acidification. The exact names and the exact timing is debated, but the overall trajectory of life on Earth is well-understood: We are in the midst of Earth’s sixth mass extinction, and the odds of human civilization reaching the 22nd century are often estimated at no better than 50/50.

When I began teaching environmental change in 2005, I focused on how to build a track away from the cliff of environmental catastrophe. When I returned to teaching in 2014, I found that I no longer could see a track that turned away from the edge. We are already locked into catastrophic changes, terrible human and animal suffering, the loss of so much of what makes this Earth itself.

This shift in my thinking was partially the result of what we’ve come to realize is truly possible with regard to environmental change, informed by broader public and scientific discourses on strategies that are moving away from prevention and toward mitigation and adaptation. But it probably mostly came from my new willingness to see and acknowledge the hardest parts of this reality that had been there all along.

We are already locked into catastrophic changes, terrible human and animal suffering, the loss of so much of what makes this Earth itself.

I’ve now taught about climate change and biological annihilation four times since my illness. Each time we are closer to that edge. More carbon emitted. More warming locked in. More species gone. More wildness lost. More homes destroyed. More starvation, wars, and human suffering have come to pass. In conversations about climate, there is a knowledge widely shared but rarely explicitly stated, that we are no longer able to prevent destruction, biological annihilation, and perhaps the end of human civilization as we know it, we are simply postponing it. Sometimes my students realize this and I watch them crumple into climate nihilism. “If we can’t ‘save the Earth,’ ” they ask, “why bother? Should I just drive my gas-guzzler and fly everywhere and just give up?”

In contrast with my students’ nihilism, I have found that my response to our hurtling toward the brink is more one of personal grief. It is made all the more acute by parenting and its attendant opportunities to see the world through the dual lenses of my eyes and my children’s. Their wonder at the natural world is still untainted, but when I look, I see ghosts of what’s already been lost. My children barely know the joys of hunting for fireflies on a summer night; there are so many fewer fireflies to find. Sometimes this fills me with a grief so profound I cannot catch my breath.

In teaching about the Earth, I want to turn away from the hardest material. I construct my syllabus to end with a discussion of air pollution and the Clean Air Act, to show the students that we have wrestled with thorny problems and won in the past. But neither I nor my students are so naïve to think that climate change and biological annihilation can be transformed in the way that acid rain and air pollution were radically transformed, for the better, by a single piece of legislation. Too much has been lost, and too many more losses are already locked in.

So should we all succumb to nihilism, rage, and grief about our Earth? Should we all just look away, go on with our small lives, and ignore what is happening around us? For years I have wanted to look away. I have thought about no longer teaching about Earth’s destruction because it is so painful. But every year I teach it again. I assign my students new readings, articles by scientists and academics, members of my methodical tribe, chronicling, quantifying, and categorizing the losses we are suffering. Their work is academic, but what they are witnessing is much greater than what they can count. To truly witness this moment on Earth, we can’t just name the species lost. We must mourn them.

In this work of grief and naming and acknowledgement, my training as a scientist doesn’t help me. But my training in mindfulness does. Because I learned how to breathe with loss, I can choose not to look away from the hard things, but to sit with them, acknowledge and name the pain, and trust myself to be able to move forward. This may be what I truly have to offer my students and my children. Many students come to my classroom already knowing about carbon dioxide, sea level rise, and mass extinction. What they don’t know, because none of us really do, is how to move forward, how to breathe, and how to live with the knowledge of our own personal and planetary mortality. But perhaps I can offer them tools to endure with some grace.

To fully process what we are losing on Earth, I had to stop responding only as a scientist. My way forward comes instead from my experience of illness. My stem cell transplant wasn’t pointless just because I will, eventually, die of something. The years I’ve gained, however few or many they may be, are precious beyond measure. So too with the Earth. Each generation of humans living in relative abundance, each species saved from extinction for another 50 years, and each wild place left to function and inspire in its wildness, is precious beyond measure.

As I have begun sitting mindfully with the sadness of Earth’s destruction, I have started to incorporate it into myself. Mindfulness doesn’t decrease my sense of loss, but it reminds me I can get through it, year by year, hour by hour, breath by breath. It helps me acknowledge the pain, and to start to name it not just as a scientist, but as a human spirit. It helps me tell my students each autumn that the atmosphere contains more carbon dioxide than it did the autumn before, to write checks to environmental advocacy organizations, to write my representatives to fight the willful blindness I see in our government.

My stem cell transplant wasn’t pointless just because I will, eventually, die of something.

When I was ill, I was terrified, as you might expect for a 37-year-old mother of two kids under age 6, and a disease with a two-year survival rate of 25 percent. Initially I read all the statistics on prognosis for my disease, my age, my gender. My anxiety began to ease only when I fully acknowledged and named the nearness of death, no matter how I sliced the numbers. By being more present to my suffering on my worst days, by naming it not just clinically but as a full-hearted human desperate to stay alive, I found myself more present to my joy as well. By finally looking mortality in the face, its presence in my soul began to shrink, and I could enjoy the small joys that I could find. I taught my 2-year-old to taste honeysuckle; I showed my 6-year-old cicada shells.

Inevitably, the climate will warm; whole ecosystems will be lost; and someday, there will be a last generation of humans on Earth. But the years we can postpone each loss, and each wild place and creature saved, are incalculably valuable. And so I keep teaching, and processing, and working to stave off the inevitable. I don’t know if any of those things will truly prevent catastrophic changes on Earth; I suspect not. But I give these gifts freely, hopefully, and in the knowledge that they are all I have to give. Nothing we can do will prevent the Earth from being deeply transformed. Maybe the next generation, my children or grandchildren, will be the last to live in large-scale human civilization. Or, maybe the efforts of me, my students, and millions of other like-minded folks will push back the inevitable collapse for another 100 years, or 500 years, perhaps allowing us to coexist longer with the wonder of wild places and creatures.

There is no preventing the inevitable, but the delay is precious. It is all we have.