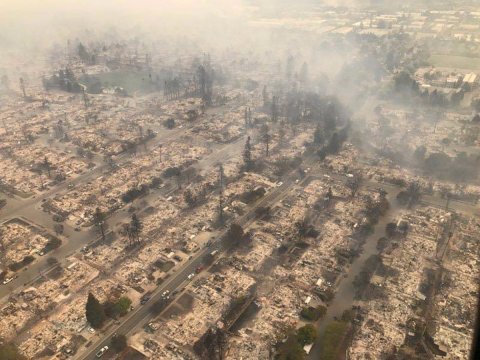 467 Ways to Die on a Warming Globe – Clive Hamilton

While most people in most countries accept the truth of climate science, they reject its implications. What can be done to change that?

A new study published in Nature has found evidence for 467 ways in which climate hazards due to global warming are making life on the planet harder for humans. It confirms that we are witnessing a shift in the functioning of the Earth system as a whole, a shift to a new state that is unsympathetic to the continued flourishing of human life.

A changing climate is only one feature of a warming globe. Human activity has bounced the Earth into a state that has no equivalent in its 4.5 billion year history.

The Earth’s new trajectory as it spins into the future has led scientists to tell us we have entered a new geological epoch, the Anthropocene. We have crossed a threshold and the geological clock cannot be turned back. The disruption we have caused is increasingly unpredictable and uncontrollable, and it has no endpoint.

There are, therefore, two questions humankind must face. What must we do to prevent serial disasters becoming existential catastrophe? And how can we make our social and economic systems flexible enough to cope with the new dispensation?
There are several reasons an international agreement has proven so hard. The leading one is sabotage by climate science deniers. Can it be countered? Climate science denial was invented and propagated mainly in the United States by the fossil fuel industry in the 1990s and early 2000s.

Activists know how to thwart an industry lobbying campaign. But then something calamitous happened – rejecting climate science became caught up in the culture war. The Tea Party and Fox News were largely responsible for the shift. Before then, even a conservative like Sarah Palin accepted the science and called for action. But after 2009, rejecting climate science became a badge of political identity for conservatives.

Just Trump?
Last week Donald Trump, who calls climate science a hoax, visited a California devastated by wildfires. When asked whether his visit would change his mind about climate change he said “No”. What else could he say? The journalist was asking him if he would change who he was.

Yet it’s too easy to blame the world’s slowness to act on crazy American deniers. Because, in a way, we are all climate science deniers.
The full truth of what humans have done is almost impossible to take in. To fully embrace the message of the climate scientists means giving up the deepest presupposition of modernity – the idea of progress. Relinquishing our belief in progress means we must let go of the future, because we have been taught from infancy that the future is progress.

While most people in most countries accept the truth of climate science, they don’t accept its implications. What can be done to change that?

Changing minds
When it comes to communicating the science’s message to the public, there is no magic potion to be found. A lot has been tried and some of it works reasonably well, up to a point. The scientists must keep doing their research and putting it out. Accusing them of alarmism is a calculated political slander; in truth, they have consistently been too cautious in their warnings, especially in IPCC reports.

Yet the meaning of their reports has not sunk in. It’s clear that an Earth warmer by four degrees – and after the unwinding of the 2015 Paris agreement that is the path we have returned to – will impose enormous stresses on all societies.

In poorer countries, it will lead to mass migrations, many deaths and violent conflict. The effects in wealthy countries will depend on who holds power and how they govern. Disasters, food shortages and waves of immigration will magnify resentment against the rich, who will be attempting to insulate themselves from the turmoil around them.
But they too depend on the infrastructure of urban life – electricity and water supply, sewerage and waste disposal, transport systems for food and so on. And they can’t insulate themselves from social upheaval.

But however humans live or die on the new Earth we have made, we are approaching the endpoint of modernity and must accept that it is finally true that man is the environment of man.

Clive Hamilton is professor of public ethics at Charles Sturt University in Canberra and author of Defiant Earth: The fate of humans in the Anthropocene