Gillian Caldwell Coming out of the closet: my climate trauma (and yours?)

By: Dean Walker|Published on: May 23, 2019|Categories: Articles, Grief, Psycho-Spritual Resources, Reconnect With Self| 0 comments 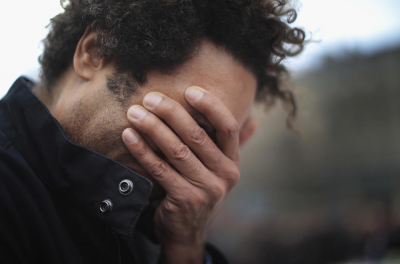 Gillian Caldwell Coming out of the closet: my climate trauma (and yours?)

Coming out of the closet: my climate trauma (and yours?)

(Read this article in its original form – 1Sky)

I have spent my lifetime face to face with some of the most brutal and inhumane acts ever committed, but nothing has been as traumatizing for me as trying to get action to tackle the climate crisis.

As a long time human rights defender and prior Executive Director at WITNESS, I helped produce and direct films on rape as a weapon of war and amputations in Sierra Leone’s recent bloody conflict, I conducted an undercover investigation into the Russian mafia’s involvement in trafficking women for forced prostitution, I investigated hit squads in apartheid South Africa, and I spent countless hours in editing rooms watching first hand images of death, destruction, and devastation.

But spending my days and nights trying to get our country to tackle global warming is more emotionally demanding than any job I have ever done.

When I was at WITNESS, people used to say “The work you do must be so difficult. How do you manage?” to which I would respond “Well, I can see the results. And it’s not as bad as environmental work would be!” What I meant when I said that five years ago is that I felt overwhelmed by our inexorable march to “pave it all” — parking lot by parking lot, McDonald’s by Wal-Mart.

But seeing former Vice President Al Gore give his now famous slide show at the TED conference in 2006 convinced me that nothing mattered more than tackling global warming, and that climate change had massive humanitarian and human rights consequences. There was no looking back, so in mid-2007 I leapt, knowing that I was headed straight towards my deepest fears and concerns.

As I started to immerse myself in the science and early impacts of global warming, I became increasingly distraught. But I soldiered on, hoping against hope that I would be so busy in an ambitious new start up campaign at 1Sky, and so relieved to be trying to do something about it, that I would not be overwhelmed with existential angst and despair. Looking back on the last year and a half since I started as 1Sky’s Campaign Director in the Fall of 2007, my wish has generally come true. But since President Obama’s inauguration and the 2009 clock started ticking on the countdown to Copenhagen, I feel myself slipping. And I know I am not alone. 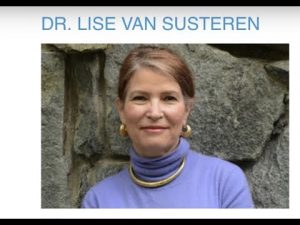 So when Dr. Lise Van Susteren, a psychiatrist and co-convenor of last month’s conference at the National Wildlife Federation on the Psychological Aspects of Climate Change asked me to videotape an interview (part 1 | part 2) with her that would be played before the heads of the American Psychiatric Association and the Centers for Disease Control, I agreed. And in spite of the fact that I found myself weeping at several points during the conversation and know it never bodes well for a woman in leadership, I let her play it during the plenary session in conference.

I did that because I believe that I and many other people around the world are suffering from “Climate Trauma.” It’s my own term. I am not a mental health professional, but I can identify plain as day the symptoms I recognize in myself and in my colleagues traumatized by our work to tackle climate change. And these symptoms are of course different from, but related to, the much deeper trauma of those who are already being directly impacted by climate change, whether through dislocation, drought, or the death of a loved one:

When Dr. Spencer Eth, a respected forensic psychiatrist, saw the interview I did with Dr. Van Susteren at the conference, he wrote a short article on “Climate Warriors and Emotional Burnout.” He wrote:

The mission of a ‘climate warrior’ is demanding and may become self-sacrificing. The activist must articulate terrible truths about the coming ecological catastrophes. Indeed, future scenarios may approximate what psychiatrist Robert Lifton described as a death imprint – the indelible images of the grotesque that the person cannot assimilate. 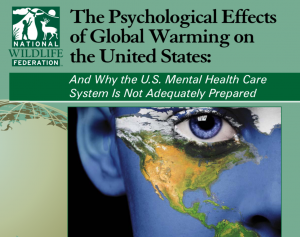 Dr. Van Susteren followed up with some advice on how to sustain ourselves.

And so, we find ourselves “surfing the apocalypse,” as my friend Gary Cohen from Health Care Without Harm would say. We know that this crisis is an opportunity to reinvent the way we are living our lives, and to steer this troubled ship called Earth towards safer harbor. In our despair, we must surface all our passion and commitment and power to ensure that we come together as an unstoppable force for change, turning the tide back in the right direction, and lifting all boats. 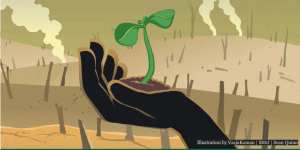