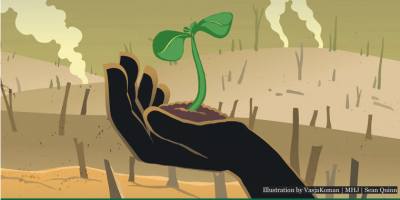 Author of The Five Stages of Awareness (which is often quoted throughout the work of www.LivingResilience and Deep Academy), Bodhi Paul Chefurka offers another layer of his experience, dancing on the edge of collapse.

I was recently asked to respond to a short email interview. My response seems like a nice summary of how I’ve spent the last decade and a half of my life, so I thought I would share it here.

1) What is collapsology and what role does a “collapsologist” play?
“Collapsology” isn’t a formal field of scientific study. Instead, it’s a way of describing the open-source research of individuals who are concerned that society or civilization may collapse at some point, possibly in the near future, due to the convergence of various internal and external pressures. These pressures include environmental, ecological, economic and structural problems, among others.
Chief among the environmental problems is climate change, closely followed by ocean acidification. The main way in which climate change could cause social collapse is believed to be food supply issues caused by extreme weather events such as droughts and floods.

Other problems are related to population and consumption overshoot, as described by William Catton Jr. in his exceptional book “Overshoot”.

Structural problems include the rise of authoritarian governments, and various issues related to complexity. Joseph Tainter has written an excellent short book on the collapse of complex societies in which he speculates that collapse might result from the diminishing marginal return or utility of solutions to increasingly complex problems.

As all of these issues interact, collapse is usually seen as the result of the unexpected consequences of their interactions, rather than being ascribed to any single factor. Because of this, “collapsology” tends to be concerned with identifying these interactions. As a result, the field is highly speculative, and its practitioners tend to be prone to confirmation bias.

Collapsologists play the role of social “thought leaders.” They identify and support the existence of large-scale issues that others may not have recognized. They also invite others to think deeply about the negative consequences of situations that most people take for granted and see as benign or positive – for example, the growth imperative of modern civilization. As a result collapsologists are often seen as modern Cassandras or Jeremiahs. This pejorative view has been fading as climate change has made its way into mainstream conversations.

2)What lead you to seek an answer in spiritual traditions?
One of the problems with collapsology is that it tends to cause despair in its practitioners. This can lead to deep personal psychological suffering, especially as one begins to realize how little chance there is that civilization will change in ways that would allow collapse to be avoided. The suffering caused by this despair can be intense, to the point of being life-threatening. At least one notable collapsologist, Michael C. Ruppert, committed suicide, and I thought about it regularly during my darkest times.

As I have outlined in my essay “Climbing the Ladder of Awareness”, it seems to me that a collapsologist may reach a point where action becomes essential to alleviate this suffering. I have described one of the choices available at that point as an “outer path” which involves a focus on those aspects of the outer world that one can influence personally. Examples of this could include permaculture, off-grid living, local activism – any activity that permits one to see the effects of taking personal action. This helps to redirect one’s attention away from problems that are too large for individual actions to affect – such as climate change in the large, ocean acidification or species extinctions – and toward those things that one can influence.

The other choice involves what I called the “inner path” which involves a focus on spirituality. Despite never having been spiritual, this is the one I was most drawn to. My first spiritual connection was with Buddhism, and I rapidly discovered why so many collapse-aware people are drawn to it. To put it succinctly, Buddhism teaches techniques that are directed specifically at alleviating suffering. The core teachings of Buddhism are described in The Three Universal Truths, the Four Noble Truths and the Eightfold Path.

The Three Universal Truths:
1. Everything is impermanent and changing
2. Impermanence leads to suffering, making life imperfect
3. The self is not personal and unchanging.

I quickly realized that the key to understanding the source of my misery lay in the second Universal Truth and the second Noble Truth. My suffering arose because I was attached or clinging to a static concept of the world that didn’t change. Through my studies and research I had become intimately aware that the destruction (or at least the drastic change) of everything I was attached to was inevitable. This created a profound dissonance in my psychology, one that I couldn’t resolve on my own.

A likely way out of this hell-hole of despair seemed to be to overcome attachment, accept the impermanence of everything, and also to recognize the impersonal nature of the Self. I phrased the latter as “seeing that my sense of Self was just a story” and realizing that there was an unchanging True Self that underlay it and was not dependent on the story of my life and experiences. The Eightfold Path became my template for exploring this new worldview.

3)What are the most important insights in your experience that, you think, people and society needs?

Along the way I have had one major insight that made my view of the future more realistic. One of my previous collapse beliefs had been that there would come a point at which “the center could not hold” and there would be a monolithic, global collapse of the structures of civilization. This belief was rooted in my own fears of change and death, and could not possibly happen in real life for a variety of reasons. Instead, I came to understand the unraveling process as one of regional fragmentation, in which various parts of the world fell apart in their own ways and on their own timetables. Essentially it’s the same effect that one sees today when comparing places like Haiti, Ukraine and Western Europe. Some regions have already experienced collapse, some are teetering on the brink, and others have some distance yet to go.

Another more recent insight is that we are not a broken species, bound by genetics and physical laws to a deterministic path of planetary destruction. There appears to have been a cultural shift in Eurasia about 6000 years ago that set us on our current voracious path. We are victims of culture, not physics. Unfortunately, that doesn’t make much difference to the outcome. The shackles of the global culture of growth are now at least as strong as any chains made of DNA and thermodynamics.

Another crucial insight was that personal actions are most effective when directed toward personal outcomes. We are not all world leaders, global statesmen or politicians on a large stage. However, we each have an influence within a smaller personal sphere, and it is from those actions that we derive the most meaning and satisfaction in life. It helps immeasurably not to take things personally, while at the same time focusing on the personal aspects of our interactions with the world.

4) Could you briefly describe life differences after having seen through the illusion of self?

I am still a work in progress, as are we all. However, I did see a profound change in myself when I realized that my view of monolithic collapse was a mistake. My despair and fear vanished, and I was able to move again, where I had previously been paralyzed.

As I worked on seeing through the illusion of the self, and understanding the operation of human belief systems better as a result, I stopped blaming people for the predicament we are in, and our inability to extricate ourselves. This has led to enormous peace of mind, as the residual hatreds that I harbored towards large corporations, capitalists, politicians and consumers began to wash away. We are all caught in the same web, and I see no reason to single out some people for special blame.

5) Any personal comments?
My advice to the world now amounts to this maxim: “Eat, drink and be mindful.”

In more specific terms, my approach to living revolves around this set of precepts:

1. Stay awake to what’s happening around us.
2. Don’t get hung up by other people’s “shoulds and shouldn’ts”.
3. Occasionally re-examine your personal values. If they aren’t in alignment with what you think the world needs, change them.
4. Hold all the world’s various beliefs and “isms” lightly, including your own.
5. Don’t blame people. Others are as much victims of the situation as we are – even the CEOs and politicians.
6. Blame, anger and outrage are pointless. They waste precious energy that we need for more useful work.
7. Forgive others. Forgive ourselves. For everything.
8. Laugh a lot, at everything – including yourself.
9. Enjoy life. It may be the only one you get.
10. Love everything just as deeply as you can.

So there you have it – a decade and more of search and research, distilled down into a few paragraphs.

I hope reading it helps as much as writing it did.