The Psychological Effects of Global Warming on the United States 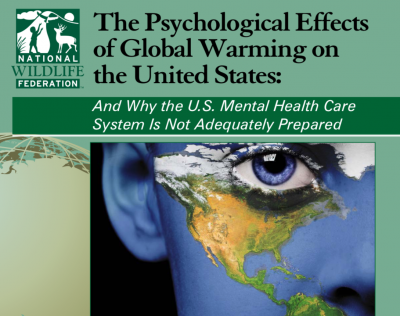 An estimated 200 million Americans will be exposed to serious psychological distress from climate related events and incidents:
The severity of symptoms will vary, but in many instance
the distress will be great.
In the coming years, a majority of Americans will experience direct adverse effects from the impacts of global warming. Natural disasters
and extreme weather events will strike many places that are densely populated: 50 percent of Americans live in coastal regions exposed to storms and sea level rise, 70 percent of Americans live in cities prone to heat waves; major inland cities lie along rivers that will swell to record heights, and the fastest growing part of the nation is the increasingly arid West.
Climate change will become a top-of-mind worry in the future:
Some Americans already are or will soon experience anxiety about global warming and its effects on us, our loved ones, our ecosystems, and our lifestyles. This anxiety will increase as reports of the gravity of our condition become more clear and stark. Despite alarming evidence that environmental conditions are worsening, a majority of Americans do not feel much conscious unease about global warming. They self-report not considering it “top of mind” and most do not see that global climate change has real implications for their daily lives. They see the global warming problem as distant
in both time and place. A lack of knowledge about the basics of climate change, the “point of no return” consequences of reaching atmospheric tipping points, along with innate psychological resistance are major impediments to fully grasping how dire the consequences can eventually be.
People may, indeed, suffer from anxiety about climate change but not know it. They will have a vague unease about what is happening around them, the changes they see in nature, the weather events and the fact that records are being broken month after month. But they won’t be sufficiently aware of the source, and furthermore, we all conflate and layer one anxiety upon another. Not knowing exactly what bothers us
is common. For this reason research, based on self-reporting, indicating that Americans do not worry about climate change is unreliable and likely underestimates the actual numbers.
Major segments of U.S. society are more psychologically vulnerable now:
• Children: America’s 70 million children will not only suffer long term effects from climate change but will also experience acute reactions to natural disasters and extreme weather events. Some children are already anxious about global warming and begin to obsess (understandably) about the future, unmoved by the small reassurances adults may attempt to put forth.
In the first known “climate change delusion” a depressed 17 year old boy was hospitalized for refusing to drink water out of fear it
would cause many more deaths in drought ridden Australia. The doctor who treated him has seen other children suffering from climate related anxiety disorders. A body of research showing how distressed Russian and U.S. children were by the threat of nuclear bombs during the cold war era underscores the potential for global climate change to have the same destructive impact.

(To read the entire report)