You Too are in Climate Change Denial – David Wallace Wells 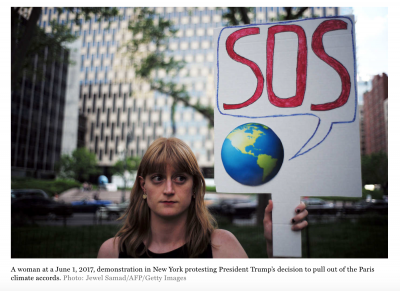 You, too, are in denial.

We all are, nearly every single one of us as individuals, even those of us who are following the bad news that suggests “the climate change problem is starting to look too big to solve”; every nation, almost none of them meeting their climate commitments, and most (not just the United States) publicly downplaying the threat; and even many of the alliances and organizations, like the IPCC, endeavoring to solve the crisis. At the moment, negotiations at the organization’s COP24 conference, meant to formalize the commitments made in the Paris accords two years ago, are “a huge mess,” perhaps poised to collapse. Last month, scientists warned that we had only about 12 years to cut global emissions in half and that doing so would require a worldwide mobilization on the scale of that for World War II. The U.N. secretary general has warned that we have only about a year to get started. Instead, on Election Day, voters in deep-blue Washington rejected a modest carbon tax and those in crunchy Colorado rejected a slowdown of oil and gas projects. In France — conservative America’s cartoon of unchecked left-wing-ism — the worst protests in 50 years were provoked by a proposal to increase the gasoline tax. If communities like these won’t take action on climate, who, in the next dozen years, will?

But perhaps it should not be surprising that, even in many of the world’s most progressive places, even in the moment of acknowledged environmental crisis, a sort of climate NIMBYism prevails. The cost of inaction is sort of unthinkable — annual deadly heat waves and widespread famine, tens of millions of climate refugees, global coastal flooding, and disasters that will cost double the world’s present-day wealth. And so we choose, most of the time, not to think about it. This is denial, too, whatever you check on a survey about whether you “believe” the climate is changing.

But denialism comes in many forms. The most florid, and morally grotesque, is that powered by profits — the oil companies pushing for rollback of emissions standards beyond even what car manufacturers want, the American politicians and lobbyists paid by them to cynically stall action and muddy our understanding of the science, as they did a few weeks ago, just after the release of the National Climate
That hard-core, bought-and-paid-for denialism is pernicious for many reasons — in fact, it may help explain why so few Americans believe “most scientists think global warming is happening.” According to the most recent Yale Climate Opinion Survey, just 49 percent do. But that is a kind of meta-misperception — it reflects what Americans think scientists think, not what we think is actually going on with the climate. And what is perhaps most remarkable about that same study is that many more Americans believe climate change is happening than believe scientists believe it: 70 percent say global warming is real, and ongoing, versus just 14 percent who say it isn’t. Among other reasons, this is remarkable is that it suggests a significant number of respondents believe that climate change is real without thinking that most scientists agree. But 14 percent is also a very small number of true deniers — it is a considerably smaller number than Americans who believe the sun revolves around the Earth. There are some Americans who believe that warming is real but not caused by humans, but only 32 percent, according to Yale, disbelieve in anthropogenic warming. That is about as many Americans who believe in Bigfoot. (Though if the Kochs got behind him, it’s possible he could get to the White House, too.)
Get unlimited access to Intelligencer and everything else New York. Learn More »
One way of looking at that data is to say that we are, despite what we hear in the media, overwhelmingly a nation of climate-change believers, not deniers — and, in fact, a nation genuinely concerned about it. In other words, as Osita Nwanevu put it a few weeks ago, “denial is mostly a distraction at this point.” (“Those still unconvinced mostly cannot or do not want to be convinced,” he added, meaning, “It’s time to stop framing persuasion as the primary task here.”)

Another is that even those of us who believe in warming, and believe it is a problem, do not believe enough in it. The flat-Earth equivalents, those 14 percent, are simply not a large-enough constituency to matter — when not being elevated so dramatically by fossil-fuel money, like puppets buoyed up by oil fumes. But the rest of us are only moderately worried, perhaps in part because we imagine the worst impacts of climate change will hit elsewhere. Forty-one percent of Americans believe climate change “will harm me personally” — actually quite a high number, in absolute terms, but considerably lower than the 62 percent who believe it will harm those in the developing world or the 70 percent who believe it will harm future generations. But thinking climate change will only hit elsewhere, or only in the future, pummeling others but sparing you — these are delusions, too, ones powered by many of the same coping mechanisms that give rise to outright denialism.
What are those coping mechanisms? Why can’t we see the threat right in front of us? The most immediate answer is obvious: It’s fucking scary. For years now, researchers have known that “unrealistic optimism is a pervasive human trait,” one that, whatever you know about how social-media addicts get used to bad news, leads us to discount scary information and embrace the sunnier stuff. And the generation of economists and behavioral psychologists who’ve spent the last few decades enumerating all of our cognitive biases have compiled a whole literature of problems with how we process the world, almost every single example of which distorts and distends our perception of a changing climate, typically by making us discount the threat.
There is, to start with, anchoring, which explains how we build mental models around as few as one or two initial examples, no matter how unrepresentative — in the case of global warming, the world we know today, which is reassuringly temperate. There is the ambiguity effect, which suggests that most people are so uncomfortable contemplating uncertainty they will accept lesser outcomes in a bargain to avoid dealing with it. In theory, with climate, uncertainty should be an argument for action — much of the ambiguity arises from the range of possible human inputs, a quite concrete prompt we choose to process instead as a riddle, which discourages us. There is anthropocentric thinking, by which we build our view of the universe outward from our own experience, a reflexive tendency that some especially ruthless environmentalists have derided as “human supremacy” and that surely shapes our ability to apprehend genuinely existential threats to the species — a shortcoming that many climate scientists have mocked. “The planet will survive,” they say. “It’s the humans that may not.”

These biases are just drawn from the A volume of the behavioral-economics literature — and are just a sampling of that volume. Among the most destructive effects that appear later in the library are these: the bystander effect, or our tendency to wait for others to act rather than acting ourselves; confirmation bias, by which we seek evidence for what we already understand to be true rather than endure the cognitive pain of reconceptualizing our world; the default effect, or tendency to choose the present option over alternatives, which is related to the status quo bias, or preference for things as they are, however bad that is; and the endowment effect, or the instinct to demand more to give up something we have — more than we actually value it (or had paid to acquire or establish it). We have an illusion of control, the behavioral economists tell us, and also suffer from overconfidence. We can’t see anything but through cataracts of self-deception.
Except when the impacts hit us, personally — or threaten to. By that perverse logic, the news is cooperating — as is the climate, unleashing unprecedented punishments, seemingly each week. Which may be why one recent survey, conducted in the immediate aftermath of the IPCC’s doomsday report, showed that 72 percent of Americans believe climate change should be a higher political priority. Sometimes, as unhappy as it is to look in the face of disaster, those disasters are overwhelming enough that they simply cannot be ignored anymore. Unfortunately, for all the talk on the environmental-left about denial, simple belief in climate change is not enough to move the needle. Already, Yale says, 70 percent of Americans believe “environmental protection is more important than economic growth.” Nudging that number up to 75 percent isn’t the important thing; what’s important is getting those 70 percent to feel their conviction fiercely, to elevate action on climate change to a first-order political priority by speaking loudly about it and to disempower, however we can, those forces conspiring to silence us. Even the ones in our own heads.